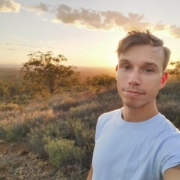 “Going to primary school where your grandfather is the head of the school had its good side and bad side,” says Dr Marcus Korb with a touch of irony.

“Everybody of course knew him which meant everyone knew who I was – which isn’t necessarily what you want when you’re young.”

Despite that, his childhood in a small eastern German village with his parents and a younger sister was, Marcus says, a “very normal upbringing” and one full of happy memories.

“I remember in the winter when it was snowing and all of the windows in the village would be illuminated, it was like something out of a movie,” he recalls.

“My grandparents and my great grandmother lived in the same village; every morning we’d go to the bakery and while I wasn’t really into sports, we were surrounded by nature and so as kids we’d spend a lot of time playing and hiking in the hills.”

He might have loved being outdoors but Marcus says he was also drawn to his studies, particularly STEM subjects.

“I found studying German very subjective, whereas with science and maths there was a right or wrong answer and clarity around the outcome, which I could relate to,” he says.

After majoring in chemistry and maths at high school Marcus decided to take a three-year apprenticeship as a chemistry lab assistant.

“I think to be honest my parents were worried that I was a little lazy,” he says. “But in Germany if you stop your five-year diploma studies half way through, you won’t get any degree at all and I just wasn’t sure I was ready for the five years.

“I thought some industry experience would help me make up my mind about what I wanted to do and it was great, helping me with my skills in the lab and my time management.”

Heading back to university and across the world

After his apprenticeship, Marcus headed back to study at Chemnitz University of Technology where he specialised in synthetic chemistry. His time working in a lab and his ‘real-world’ experience paid off and he scored the highest marks in final exams in his year.

During this time, he was constantly employed as a research assistant (“carrying out synthesis or purification for PhD students”) in the Department of Organic Chemistry.

During his third year, the young student started learning single-crystal x-ray measurements under the Professor of Inorganic Chemistry, a move that would dictate his future.

“It takes quite a while to learn but during my diploma I was able to carry out measurements and finalisations myself,” he says.

And he was getting noticed, his ‘recharged’ work ethic resulting in multiple papers and international attention from other scientists in his field.

“After my diploma my former supervisor offered me a PhD position and I received a two-year scholarship from the ‘Association of the Chemical Industry’,” Marcus recalls.

“I finished my PhD and did one year of my PostDoc but then spoke to my supervisor about maybe completing this with established professors who had reputations in the field.

“We looked at Japan, at South Africa and at Australia but I was so happy when I was awarded a Forrest Research Fellowship in Perth,” he says.

“Europeans love Australia and coming to WA and being able to explore places like Margaret River and Bluff Knoll and living right on the Swan River is brilliant. I’m a runner and living on the doorstep of Kings Park is amazing, what a place to go running.”

Forrest fellows are carefully selected not only because they are outstanding researchers with the highest calibre of academic achievements but because their work has the potential to make a genuine difference in the world and Marcus certainly fits the mould.

Modern catalysis in the fine chemicals sector has been dominated by precious, noble metals such as palladium, platinum and iridium which are used in a wide range of reactions. However, these metals (used in everything from electronic devices to additives to pigments) are expensive, in short supply and can have precarious toxicological and ecological properties.

Marcus says it’s for this reason that attention has shifted towards base metals like iron, copper and nickel. As the second most abundant metal in the Earth’s crust after aluminium, iron is particularly attractive to researchers in his field.

“As a transition metal it covers a wide range of available electronic states, which gives you flexibility. My research will develop iron catalysts for a range of chemical transformations, with a focus on demonstrating chemical bond forming reactions important in the fine-chemicals sector,” he says.

“By decreasing reliance on noble metal catalysts we can develop lower cost, less toxic chemical processes. This will allow preservation of the valuable noble metal resources for those processes which are necessary for future generations.”

Marcus admits its complex work, saying: “There’s a lot of trial and error and from time to time the research can be very challenging – you feel like you’re a bad chemist, you don’t know if it’s you or the chemistry!”

Nevertheless, he was recently able to develop an unexpected reaction which was published in the leading journal for inorganic chemists, Inorg. Chem.

In his downtime, Marcus enjoys spending time with his partner, an Aussie who he says is keen to visit Germany once the borders reopen.

“It’s funny, he loves the cold and I like the heat so I think he’s going to like Germany and I’m always going to like Australia – I’m sitting out in the sun right now and this is in winter! The quality of life here is very good.”