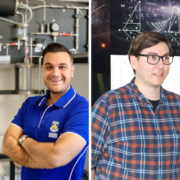 Dr Arman Siahvashi from the Department of Chemical Engineering at The University of Western Australia and the Future Energy Export CRC has been named a finalist for the Woodside Early Career Scientist of the Year. Dr Siahvashi is undertaking world-class research and developing cutting-edge technologies to reduce the costs and eliminate the safety hazards associated with clean energy production such as liquid hydrogen. He has developed a multi-award-winning apparatus to accurately measure the freezing temperatures of trace impurities at extreme cryogenic temperatures and high pressures. His research has led to collaborations with scientists at NASA and Jet Propulsion Laboratory on liquid hydrogen as a rocket fuel and also dissolution geology of Saturn’s moon, Titan.

Mr Liam Scarlett from Curtin University’s School of Electrical Engineering, Computing and Mathematical Sciences has been recognised as a finalist for the ExxonMobil Student Scientist of the Year. Liam is completing a PhD in theoretical physics, focussing on modelling the fundamental reactions which take place in fusion, medical, and astrophysical plasmas. A highlight of his research has included developing a theory and suite of computer programs to produce the most detailed database of electron-molecule reaction probabilities to date, which was used by scientists working on the International Thermonuclear Experimental Reactor.

The winners of the 2021 Premier’s Science Awards will be announced at a ceremony during National Science Week.