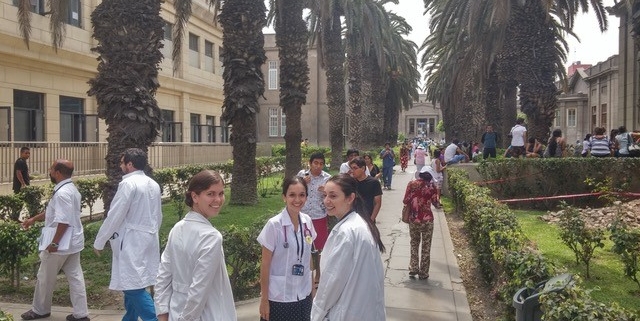 “My quiet time is spent reading, I love the library,” says softly spoken the Venezuelan-born Forrest scholar who’s completing her PhD in Public Health at Curtin University and the Wesfarmers Centre of Vaccines and Infectious Diseases at the Telethon Kids Institute.

She says it couldn’t be farther away from her childhood in Caracas, Venezuela’s densely populated capital, where she grew up the only child of a librarian mother and writer father.

“I know, it’s funny that they are so humanities based and that’s what I thought I wanted (for my career) all the way through school,” Glady laughs.

“I was a voracious reader and my main focus was on liberal studies, but dad discouraged me. He said I could enjoy all of that without making a career of it and that I should focus on chemistry which I was also good at.”

Both her parents, says Glady, firmly believed in the importance of study.

“They said ‘the world will become something for you once you’ve learned’. They had a very can do attitude, they believed in me and saw education as a way through everything.”

The sphere Glady’s parents were keen for her to find a foothill out of, Caracas, was once a thriving cosmopolitan city.

However, the weight of hyper-inflation, crime and poverty has seen it transform into a dangerous place to live, says the young researcher.

“I grew up surrounded by slums, that was the reality of a working class upbringing,” she says. “I think that’s one of the things driving me now, I want to make sure that everyone has access to the basic necessities – things like clean water, vaccines, basic medicines and contraception.”

A move into medicine

Fast forward a decade and Glady had taken her father’s advice and enrolled as a medical student at the Central University of Venezuela, the oldest university in the country and a UNESCO World Heritage Site.

She specialised in paediatrics and child health before moving into paediatric infectious diseases and completing further training in tropical medicine and hygiene.

“I’d always liked knowing why things happen, why some people are more prone to getting sick than others and when I got to university I discovered it was the world’s more vulnerable people who captured my attention,” she says.

“To me, there is nothing more vulnerable than a mother and kids or a child who is sick and who needs attention. I found I could easily empathise with other women’s pain and suffering and I couldn’t have imagined doing anything other than paediatrics.”

While working as a junior faculty member in Parasitology at the School of Medicine at Central University and in the emergency department as a paediatrician, Glady visited another South American country, Peru. A trip that would change her life.

“I met many Australian clinicians while I was in Peru. While I’d always thought of the UK as the place to do my PhD, I realised that Australia was another option,” she says.

“I’d been working with gastro and parasites in my home country and thought I could possibly do something similar and so I started applying for scholarships.

Being chosen as a Forrest scholar, she says, helped her “find her place”.

“I was so happy to come to Perth, with its beautiful beaches – the contrast between Western Australia and my home country is quite dramatic, there is the access to so many opportunities here,” she says.

“It’s also been a privilege being in Perth during a pandemic but I can’t forget that the people from my home country and across the globe have not had the same luck.

“I seek inspiration from and look up to Dr Mark Ryan and Maria Van Kerkhove from WHO, they are my secret mentors,” she adds.

Glady’s research is focused on the potential of the whopping cough vaccine to help in reducing “the tsunami” of cases of childhood food allergies, including life-threatening allergic reactions to things like eggs, milk, peanuts, and tree nuts.

“We’re investigating whether an early single dose of the ‘whole-cell’ whooping cough (pertussis) vaccine given at the age of six weeks and followed by the currently recommended acellular whooping cough vaccine at four and six months of age, may prevent the early onset of food allergy in Australian-born infants,” Glady explains.

“We believe the older vaccine (whole-cell), which is still being used in many places around the world, may prevent allergic outcomes.”

She says the hypothesis that vaccines might have a role to play in reducing the risk of allergies is exciting and fits perfectly into her dream of one day being involved in policy making through Gavi, UNICEF or WHO.

“I’d like to be based in a space where I can focus on female and child health, and the social determinant of health and disease to further improve access to vaccinations, through the extended program of immunisation in countries with fragile economies like Venezuela.

At the same time, I dream on going back to the wards and working as a clinician on refugee and international child health,” she says.

In the meantime, in her downtime, you’ll more than likely to find Glady in the library if she’s not busy at work or having the occasional swim in the ocean.

“I still love reading books, that’s my thing, the peace and quiet,” she smiles. “I’ve joined the Reading Circle at Perth City library, a safe space where women with English as a second language meet once a week with library staff and discuss passages from a book or news articles.

“While I’m sad I miss some sessions, I find inspiration in all of them, and I’m very much looking forward to knowing more about my peers’ inspiring stories.”

And this is one young woman who certainly has an inspiring story all of her own.