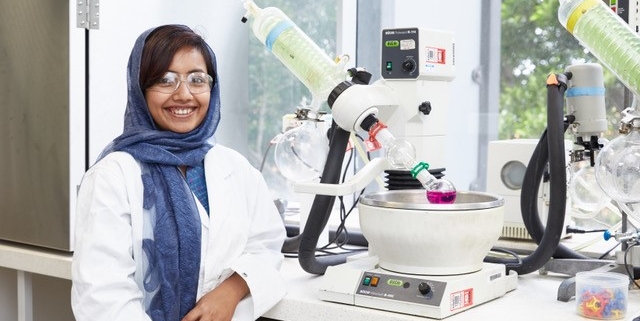 For Masnun Naher, the road to a career in science has been more difficult than that of many of the people she has come to know as a Forrest Research Foundation Scholar.

“Gender discrimination is one of the major problems in third world countries and in Bangladesh it begins at birth,” the softly-spoken young Bangladeshi scientist says.

“Young girls, teenagers and women suffer equally and each has to face many difficult situations involving gender-related issues if they want to be successful.”

One of the most densely populated nations in the world, Bangladesh – a small south-east Asian country lying on the Bay of Bengal and bordered by India to the west, north and east and Myanmar to the south-east – boasts areas of stunning natural beauty.

But at only two-thirds the size of the Australian state of Victoria, the country is also home to more than 161 million people (compared to a comparatively lean six and a half million in Victoria).

The rapid and unplanned urbanisation has led to widespread pollution, over-crowding and poverty.

While recent sustained economic growth is seeing some turnaround, for women it is still an environment where deeply-rooted socio-cultural constraints and a lack of work opportunities can be obstacles to success.

This is especially true, Masnun explains, for women choosing the path of higher education, something the 31-year-old says she set her heart on from a young age.

“My favourite subjects at school were chemistry and maths – I realised early on that maths was something I was good at,” recalls the eldest of four siblings who grew up in the small town of Brahmanbaria in eastern Bangladesh.

Continuing on her path

Tragically in 2007, the year after she began her Bachelor of Science at Shahjalal University of Science and Technology (SUST) in Sylhet, Masnun lost her father.

“As the eldest daughter, I had to take on a lot of extra responsibilities,” she says. “I got very strong from that time, there were financial difficulties and I was travelling a lot, back and forth to home.”

But, she persevered, completing not only her undergraduate degree with distinction but also a Master of Science in Chemistry where she scored 3.98 out of a possible 4.00 – outstanding results which saw her offered a faculty position in the Department of Chemistry at The Shahjalal University of Science & Technology (SUST).

As one of the country’s first science and technology-based universities, SUST is one of Bangladesh’s leading institutions, but even this prestigious place of learning didn’t come without its challenges.

“For instance, when I started working in a research laboratory during my undergraduate research, I was the only female among 11 students,” Masnun says.

“I had to go through some serious difficulties including not being able to work in the evening because the streets aren’t safe for women after twilight in our country. This and other issues made the completion of my research work difficult.

“Also, in a country where quality education and sufficient research facilities are lacking and outdated economic systems and technology are typical problems, there is a lack of physical infrastructure and a digital divide compared with the developed world.”

For example, she says, not having any access to an NMR spectrometer, mass spectrometer and X-ray crystallography caused serious problems in her chemistry research.

But the young scholar wasn’t deterred and before taking up her Forrest Scholarship in 2018 to complete a PhD in the School of Molecular Sciences at UWA, she published five research articles in ISI listed journals, and achieved a competitive research grant from the SUST Research Centre.

Masnun says her Forrest Scholarship and life in Australia opened up a world of possibilities, bringing her dream – to use molecular electronics to help develop next generation technology – a lot closer.

“Imagine a world in which electronic technology can be made available not only to the advanced nations of the world, but to everyone,” she says. “The basic science in this area is advancing at great pace, but less is being done to migrate the science to achievable device structures.

“My synthesised molecules show unique electronic functions, not possible with conventional equipment. These will be lower cost and have lower power consumption than current technology, providing the platform for a whole new phase of electronics.”

“This would allow us move from developmental research, towards a tangible technology that allows active molecular components to be integrated into devices,” she smiles.

Another key element of Masnun’s research is that it seeks to move away from the rare and expensive toxic metals of electronic substrates and STM (electrode) tips, to alternative electrode materials, especially carbon and even graphene.

“This result will be a significant reduction of electronic waste,” she explains. “Reducing toxicity will make it far easier to integrate into wearable electronics, and reduce the strain of electronic devices on the environment.

“Ultimately, it will also lower the cost of manufacturing to make electronics more available not only to the rich but to the masses.”

Her career dreams may be big but Masnun is also determined to get everything she can out of life.

Since 2018, she’s worked as a teaching assistant for first and third year undergraduate students at UWA and also co-supervises junior students from her group and is involved in science related volunteering work.

She loves spending time with her friends at Forrest Hall, watching movies and sharing walks and seeking out spicy food (“there’s not enough of it here!”) and says missing her family and her pets is made more bearable with regular Skype calls.

As for the future? With a 2019 World Bank report Voices to Choices: Bangladesh’s Journey in Women’s Economic Empowerment, finding Bangladeshi women still have limited choices, control and decision-making power over their employment, finances and economic assets but the country could become prosperous more quickly if more women got work with higher-quality and higher-paid jobs, Masnun says the time has come.

Forrest Fellow Dr Jessica Buck has today been named one of Australia’s official Superstars of STEM for her work into childhood brain cancer. Dr Buck’s work aims to find better treatments for kids with cancer.

Dr Buck is one of 60 brilliant women in science, technology, engineering and mathematics who want to step into the spotlight as media stars chosen for this acclaimed national program. She has studied both neuroscience and oncology at the University of Oxford where she completed her doctoral research in 2019 before returning to Australia to join the Brain Tumour research team at the Telethon Kids Institute and The University of Western Australia.

Dr Buck is thrilled to have been chosen from a very competitive national field.

“The cliché is ‘you can’t be what you can’t see’ but it really does ring true a lot of the time,” Dr Buck said.

“This program will really help to put women in STEM out there in the public eye and I’m so excited to be a part of that.”

Warden of the Forrest Research Foundation, Prof Paul Johnson said, “Jessica is a superb role model for all young women in science, and as a Kamilaroi woman she is an inspiration to other young Aboriginal women who study and work in STEM.”

Supported by the Australian Government’s Department of Industry, Science, Energy and Resources, these next 60 Superstars of STEM will participate in the program in 2021 and 2022.