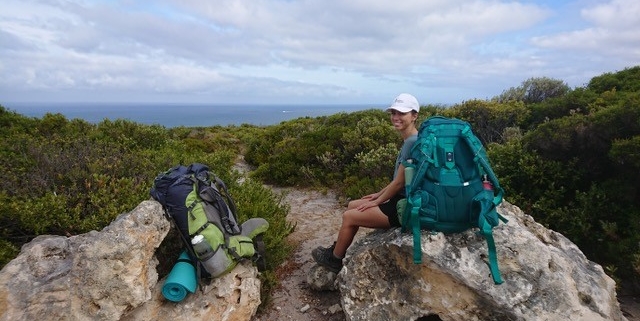 German-born Manou Rosenberg smiles when she admits she gave living in Western Australia a ‘test run’, two years before she was selected as a Forrest Foundation Scholar.

“I’d always been fascinated by Australia, without even really knowing why,” she says. “There was something about the vastness of the land that intrigued me.”

“My violin teacher was from the east coast of Australia and maybe that influenced me, I knew I had to see it, I couldn’t find the words for why.

She may have been lost for words but Manou wasn’t lacking in action. Never daunted by a challenge, the maths and science whizz took the opportunity to take part in two exchange semesters while she was completing her Masters at RWTH Aachen University in Germany.

“Australia was everything I had hoped it would be and more,” she grins. “It was beautiful and so remote in many ways. You could be in the city of Perth and there was still lots of nature around and then in no time you were out in the middle of nowhere.

“In the UK I was living on campus in the fresher’s complex and it was so different to anything I had experienced before. We don’t tend to live all on campus at home – I loved it.” 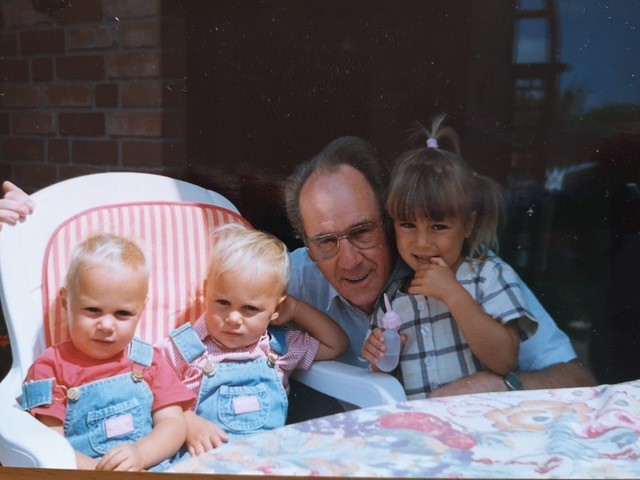 Manou as a child with her twin sisters Kim and Lea and her beloved Grandad Paul.

A border triangle and a love of maths

Manou tracks her adventurous spirit back to her childhood in Wesel, a German town set on both banks of the Rhine not far from the Dutch border.

When Manou was growing up as the eldest of three girls (twin sisters Kim and Lea are two and a half years younger), it was in a thriving community.

“I lived in a neighbourhood that was new when we moved in and there were lots of young families – we had lots of friends in the street and we were constantly playing outside.

“I have wonderful memories of staying at my grandparents’ place. They always managed to gather the whole family together – my aunts, uncles, cousin, sisters and my parents.

“My granddad was a baker and together with my grandmother they had a shop before I was born. However, they would still bake their own bread and supply the whole family and neighbourhood with all sorts of delicious baked goods!”

At secondary school, maths and German became favoured subjects. “There was something very true about maths, it’s analytical and fair,” Manou enthuses.

It was a passion that grew as she progressed through her senior school years with the help of “very good and enthusiastic teachers who encouraged me at every turn” and so there was little surprise from her family when she signed up to do a Bachelor of Science and Mathematics at RWTH Aachen University.

With students making up 15 per cent of its population, Aachen – a town with one of the biggest and longest-standing universities in Europe – is known for its picturesque medieval city centre, with narrow streets and countless cafes.

“It was such a nice city to study in,” Manou recalls. “It’s in the border triangle between Germany, Belgium and the Netherlands and there’s actually a place nearby where you can go and where the three borders meet.”

It was while there that she met her partner Tim, another ‘maths nut’ (“he went into stats and I went into analysis and complex numbers”). Fortunately, Tim also shared her love of adventure and travel. 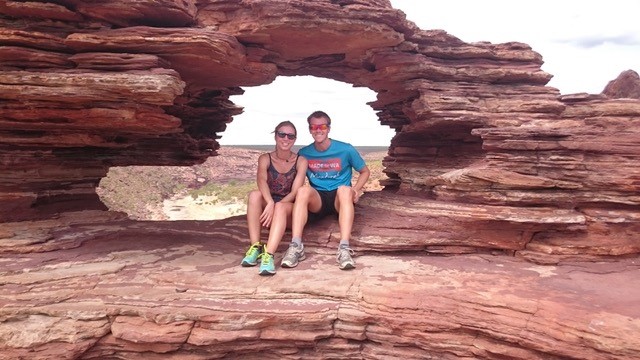 A shared love of adventure and travel. Manou and Tim at Nature’s Window in Kalbarri National Park in 2015.

Coming back to Perth as a Forrest Scholar

Manou says she was on a train in Germany when the call came through to say she’d been successful in her application for a Forrest Foundation Scholarship to complete her PhD.

“I remember the connection wasn’t very good but I understood that I had been accepted. You apply and a huge part of you thinks you won’t get in and then there it was, so exciting!”

She came back to Perth and Australia with Tim after he managed to secure a job tutoring in statistics at UWA, the couple setting up home in Forrest Hall as Manou started her research on using AI techniques to identify isolated microgrids in remote electricity distribution networks.

“Most of my studies up to this point had been all about pure mathematics with almost no application, it was very theoretical,” she says. “I wanted to be useful. That was my aim with my PhD, that I could combine my maths interest with something that would have an impact on the world.”

Having worked as a research assistant at the Institute of Energy Economics and Rational Energy Use at the University of Stuttgart, the young mathematician already had experience in energy markets, albeit from an economic viewpoint.

“My research was looking at the German energy market and how prices would develop if we had an increasing amount of renewable energy in the market, looking at things like how PV (photovoltaics) panels on rooftops would influence prices,” she says.

“I wanted to head in a similar direction and I’d already been looking into machine learning and artificial intelligence (AI), then through friends at UWA I got introduced to Professor Mark Reynolds and my (thesis) topic came together.”

Manou, who operates out of UWA’s Department of Computer Science and Software Engineering, is looking at how AI techniques may be used to develop a new network of infrastructure for electricity networks in remote areas of Western Australia.

“Local power generation can potentially replace long power lines leading to lower network costs and improved electricity supply reliability and safety and could lead to a high penetration of renewable energy resources,” she says. “My research has the potential to help shape the future of the electricity supply infrastructure in this state.” 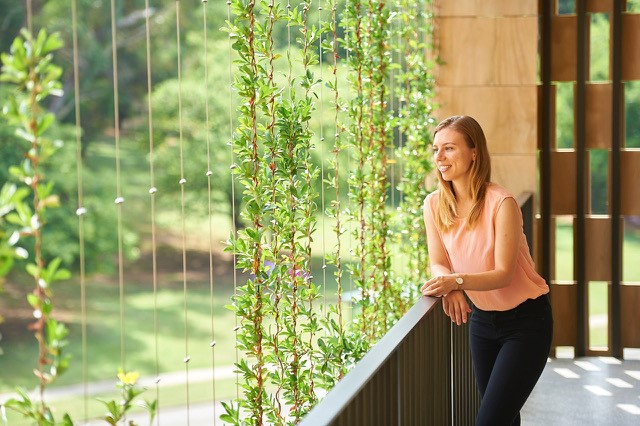 Manou at Forrest Hall where she says the views are “awesome”.

Through it all she says, the support given to her through her scholarship has helped to sustain her.

“Being a Forrest Foundation Scholar has created an inspiring environment and given me an amazing opportunity to generate and exchange innovative ideas,” she says.

But it’s not all research and work for the talented young German who enjoys running and cycling in her down time, as well as ballet.

“I also like hiking a lot,” she reveals. “My partner Tim and I took on the Cape to Cape track down south. We took our little hiking tent and stayed in the camp sites along the trail.

“At our third attempt we managed to finish the whole trek.”

Never a girl to give up – on anything! 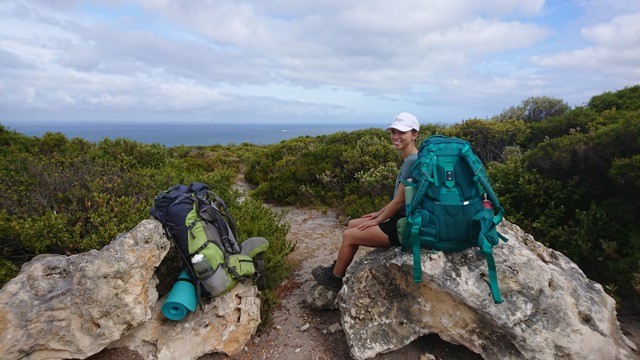 Getting out into nature — Manou on the Cape to Cape Trek at the start of 2020, before the start of the coronavirus pandemic.