Marisa Duong’s love of learning began when she was a child in Vietnam, soaking up everything she could from her computer science teacher mum and electrical engineer dad.

“We were a maths and science family that’s for sure but we had a joke in the family that while mum might have taught me some coding and a bit of English, she never taught me how to cook – she really hated cooking,” Marisa laughs.

She may not have shone in the kitchen but Marisa’s hunger for knowledge meant she made huge strides at school. So much so that when she was just 15, she travelled to Western Australia to stay with an aunt and uncle to learn better English and continue her education.

After a 10 week English course, she successfully tackled Years 11 and 12 at Kalamunda Senior High School, where she not only made school dux but also scored the highest possible tertiary admission score of 99.95.

“I think I was like a starving person seeing food once I was able to read textbooks in English, I just wanted to keep learning,” she recalls.

Thinking her family wouldn’t be able to afford for her to stay in WA, Marisa was making plans to head home to Vietnam when philanthropist Stan Perron stepped in to help.

“My aunt worked for Toyota and Mr Perron owned the business and he encouraged me to apply for a scholarship to study at UWA and so I did,” Marisa explains. “I felt like the luckiest girl when I got it, it was a really magical moment in my life.”

Approaching university with the same dedication she’d shown during her school years, the young student completed a Bachelor of Philosophy (Honours), majoring in Biochemistry and Finance. 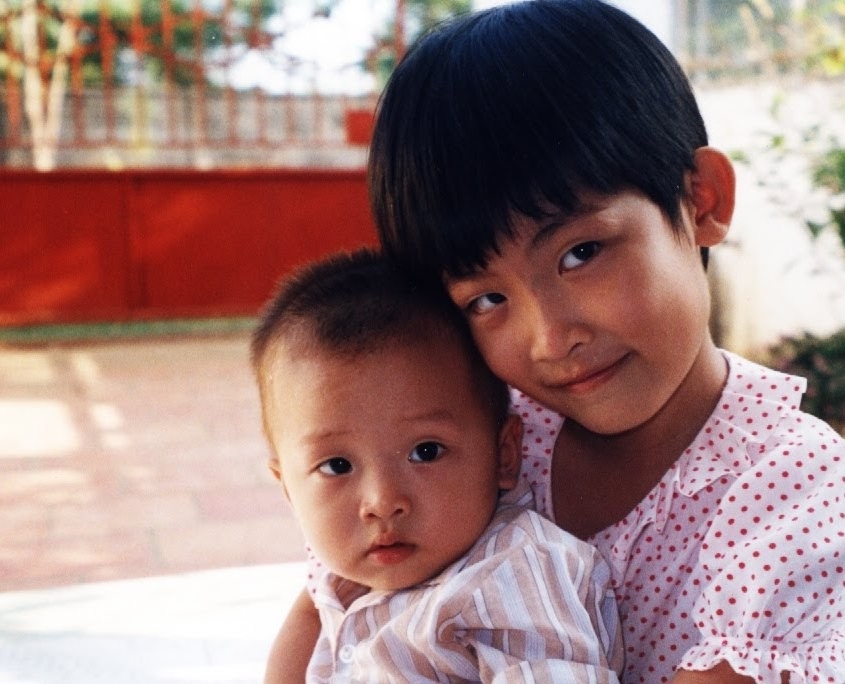 A visitor from home and a Forrest Scholarship

“It was a busy time,” she says. “During my undergrad I had the chance to do a research placement at King Eddies (King Edwards Memorial Hospital) working on an international project which was great and I was also tutoring at three different places including the School of Indigenous Studies (SIS) at UWA.

“I loved the human interaction that came with tutoring, it was a great break from being in the lab and working at SIS is something I’m still involved in.”

It was during this time that Marisa’s younger brother Henry Duong, also came to Perth to study – a familiar face who helped to ease any homesickness the young student was experiencing.

“I missed my family and I have great friends in Vietnam who I felt like I hadn’t seen for a long time and of course I missed the food, although not so much mum’s cooking as street food,” she grins.

In 2016 Marisa’s hard work and dedication saw her rewarded again, this time with a Forrest Research Foundation Scholarship to investigate protein biomarkers in oxidative stress.

“When I got the Forrest Scholarship I couldn’t believe my luck,” Marisa says. “I thought I was lucky already and then this happened!

“The generosity of the philanthropy in WA is amazing. I’m not sure if I can ever pay it back but I’ll try my best, I’m determined to do something with the life-changing opportunities that I’ve been given.

“Mr. Stan Perron actually attended on the day I was awarded the scholarship and being there with him and with Andrew and Nicola Forrest felt very surreal.

“From coming to Australia to learn English to that moment, it was like a dream.” 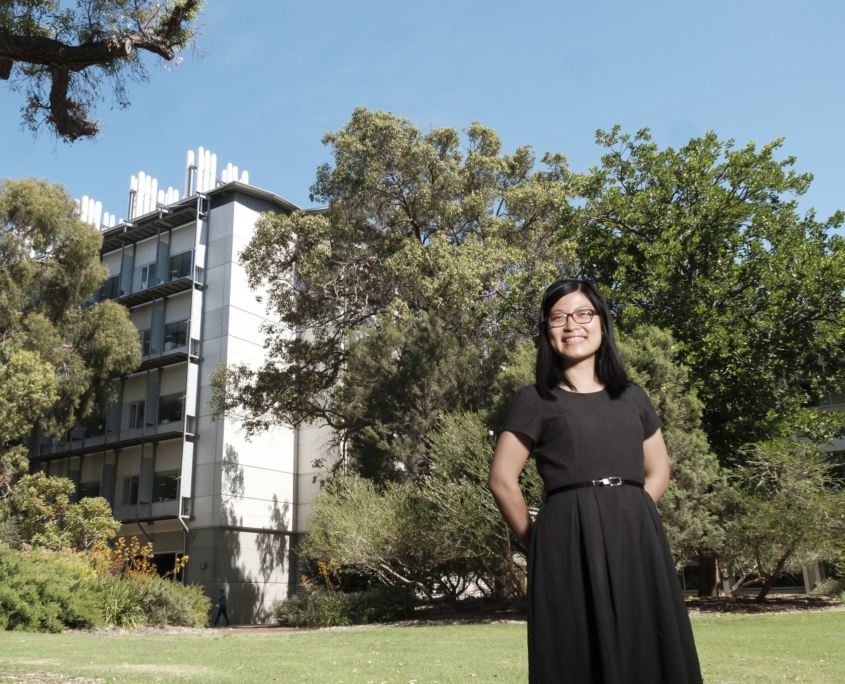 Feels like home. The large grey structure that is UWA’s Bayliss Building was very familiar to Marisa, as the place she did a lot of her PhD Research. Here she is in December 2016.

Fast forward four years to 2020 and in the midst of a year with challenges no-one in the world could have predicted due to a global pandemic, Marisa completed and submitted her PhD, which she describes as “an enormous relief”.

A continuation of her Honours project, her thesis investigated how protein thiol oxidation contributes to worsening the disease progression of Duchene muscular dystrophy – a debilitating illness which leads to the premature deaths of one in 3,500 schoolboys globally.

“At the moment there is no cure and no effective treatment for this muscle wasting disease which is caused by a genetic fault that prevents the production of a protein called dystrophin,” she says.

“Although the primary defect is genetic, secondary processes involving persistent inflammation and oxidative stress exacerbate disease progression, and, as such, are potential therapeutic targets.”

Proteins, she explains, are little machineries that carry out numerous functions for the cells in our body. In many diseases, our cells suffer from a state called oxidative stress where the protein structures and functions are changed, which worsens the disease symptoms. 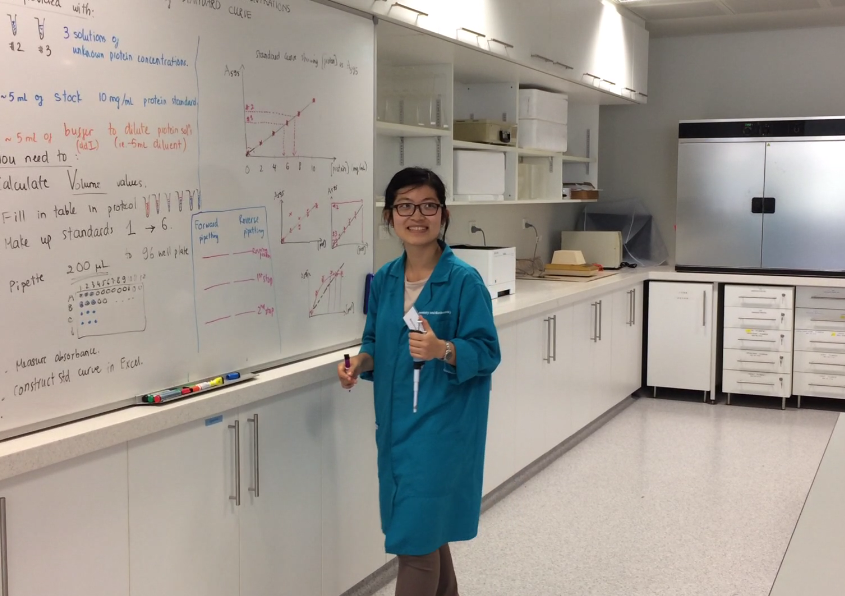 Making sense of ‘that’ whiteboard – Marisa during a lab demonstration at UWA.

As part of her thesis, Marisa worked with Proteomics International at Perth’s Harry Perkins Institute of Medical Research to develop advanced mass spectrometry methods to measure the oxidation level of thiol groups on proteins, which are particularly sensitive to oxidation.

It’s work she will continue in her new fulltime role with the medical technology company.

“By better understanding what happens inside the disease cells, we are better able to develop effective treatments,” Marisa says.

“I hope that the techniques I develop through my research might ultimately be applicable to other conditions and diseases including Alzheimer’s, atherosclerosis, diabetes, heart attack, HIV/AIDS, kidney and liver disease, muscular dystrophy, Parkinson’s, Rheumatoid arthritis, stroke and aging.”

As for the future, an unassuming and incredibly modest Marisa says she’s excited about being able to continue her life in Perth and seeing where her research might take her.

“I feel very, very lucky,” she says. “I do work hard – I don’t think I’m exceptionally talented but I love learning and I love research.

“WA has helped to shape my personality and I love my Australian friends. The people here are so friendly and it is easy to feel included and to feel part of the community. I have some friends from Northern Europe and they say it’s not like that there!”

And while she’s still not tempted to work on her cooking skills, the one-time martial arts fan, she laughs that she is slowly rediscovering the wonder of free time.

“I used to do karate and used to go to the gym but that’s all changed now since COVID,” Marisa say. “I like playing the piano and now that my PhD is submitted, I am reading more novels. It’s such a strange feeling to not be busy every hour of the day and night.”

Making it look easy. Marisa in familiar surroundings in a UWA lab.