Bhedita Seewoo laughs that growing up the middle of five children in a highly competitive and tight-knit family might have left her with a burning desire to succeed, but it didn’t allow for much downtime.

That’s despite the fact that home was a small northern village on the African island nation of Mauritius, famous for its stunning beaches with turquoise waters and impossibly white sands fringed with lush green vegetation.

Legend has it that an islander once told Mark Twain that ‘Mauritius was made first and then heaven; and heaven was copied after Mauritius’. Many would agree.

For Bhedita though, it was books and learning and a fascination with science and in particular the human brain, that commanded her attention, rather than the picture postcard surroundings that formed the background of her childhood.

“I remember always being amazed by the brain – it’s our most complex organ, the one that controls everything but the one that is also the least understood,” she recalls.

It was a fascination that led to her father, a University of Delhi graduate employed in the Mauritian government in law and management, suggesting his middle child pursue a career in medicine.

“I was scared at the sight of blood so I told him that wasn’t happening,” Bhedita grins. “I also knew I was the sort of person who would struggle if someone died at my hands.”

It was confronting that reality, Bhedita thinks, that saw the seeds sown for a career in research rather than as a clinician. But there would be one last hurdle in the young student’s way before she could begin her undergraduate studies.

“My home country operates on a laureate system where the top students get a scholarship to abroad to study,” she explains.  “They usually take the top eight students and I came in 10th in my year. The next year, they changed it to the top 10 students! So my family had to pay for my undergraduate studies and for me to travel, which was a big ask.” 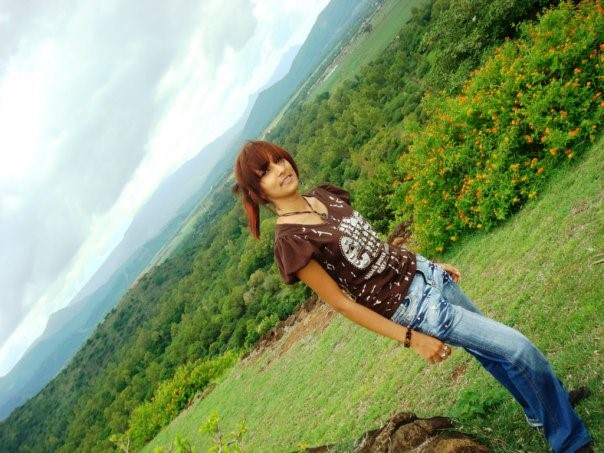 A 17-year-old Bhedita just about to start her second last year of high school on a family holiday at the popular tourist destination, Grand-Bassin in Mauritius.

Embarking on a whole new life of study in Australia

Supported by her parents, it was Perth where fate decided Bhedita would plant her university roots, beginning at Murdoch University, where she completed her undergrad and honours in Biomedical Science.

It was during a third-year undergrad unit that she had a sliding doors moment that would influence the whole future direction of her career.

“We had to choose an assignment topic and of all the things in front of me, I decided to focus on Alzheimer’s disease because I’d always found it very sad that people can forget those they are the closest to,” Bhedita says.

“While reading up about it, I came across a paper about the use of repetitive transcranial magnetic stimulation, or rTMS, as an alternative therapy for cognitive impairment in this disease. This spiked my interest and just like I think all intellectuals tend to do, I dived into the topic deeper and deeper. This is when I knew I wanted to know more about rTMS.”

A relatively new non-invasive brain stimulation technique that’s shown huge potential in treating a wide range of neurological and psychiatric disorders, rTMS uses a wound coil placed on the scalp of the subject over the region of interest.

“Not so long ago it was thought the brain was unchangeable after childhood, that it was fixed by the time we became adults,” Bhedita explains. “But scientists now know that the brain has an amazing ability to change and heal itself based on mental experiences. In fact, our brain changes every day as we experience and do different things, which is known as neuroplasticity.”

“I wanted to close the knowledge gap by showing for the first time – using the same methodology – that brain stimulation causes equivalent changes in rodent and human brains,” she says.

“The use of animal models will allow us to link the rTMS-induced changes in brain activity, chemistry and structure, using MRI, to the changes in symptoms, through behavioural tests, following rTMS treatment. This will ultimately allow us to improve its efficacy as a therapeutic tool by developing optimal stimulation protocols for translation to the clinic.”

But even before she had completed her honours Bhedita made another decision that would change her life – she applied for and was ultimately granted a Forrest Research Foundation Scholarship. 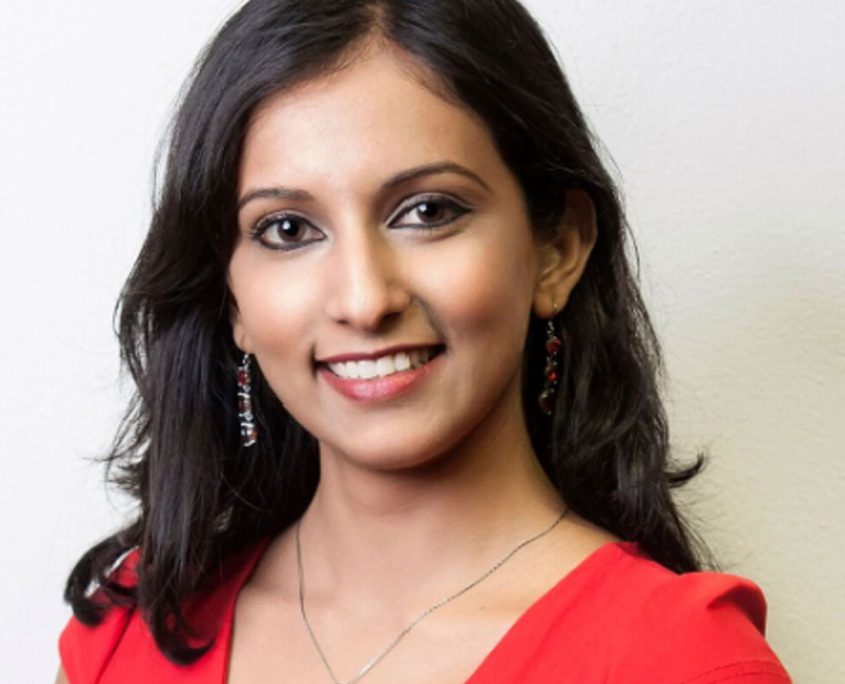 New beginnings – Bhedita just before beginning her Forrest Scholarship in 2017.

“The Forrest scholarship was the best thing that ever happened to me,” Bhedita says. “When I put my application in I was facing the prospect of having to go home because my family were at the point where they couldn’t afford for me to keep studying in Australia.

“I clearly remember that it was about 5am and I was sleeping when Andrew Forrest called me himself from the east coast to tell me that I had been successful!

“He personally rang all of the successful applicants and I remember him telling me that this was my chance to show everyone that I have what it takes. I called my parents in Mauritius and they were absolutely blown away, it was unbelievable.”

The news meant that Bhedita would be able to spend the next four years completing her PhD in Neuroscience at The University of Western Australia (UWA) under the supervision of Assistant Professor Jennifer Rodger while living at Forrest Hall.

“It’s such a nice collegiate feeling living there, a great place to be. We were the first ones to move in and I feel incredibly lucky.”

Never one to do things by halves, before completing her honours degree, Bhedita had also begun part-time work as a research assistant and then research officer in the MRI facility at UWA’s Centre for Microscopy, Characterisation and Analysis (CMCA) overseeing the operation and development of different research projects. She’s continued working there on a casual basis.

But it wasn’t all work and no play, with the passionate scientist admitting she finds time for dancing (“I absolutely love Bachata”) and also the gym, although the coronavirus pandemic has stopped that in tracks for the time being.

Dreaming big for the future

With her Forrest Scholarship soon to draw to a close, Bhedita, now 27, says she is daring to dream that she can make a “real difference” to the world through her research.

“Since coming across rTMS I’ve found out it has the potential to cure so many different conditions, not only Alzheimer’s disease but also Parkinson’s disease, anxiety, schizophrenia, obsessive-compulsive disorder and others.”

“Depression is something my mum has battled with and that’s an area I have been concentrating on.”

“My biggest dream is to be able to tailor rTMS treatment to specific individuals with specific disease conditions. People are so different from each other and one size does not fit all. To be able to adjust where we deliver the stimulation and the strength and duration of the stimulation will really make a difference.”

Also on the agenda, a trip home when international borders open again – where as well as a longed-for catch up with her family, Bhedita promises to soak up her country’s beautiful beaches.

“I love Australia and love Perth and the beaches here are stunning, but there’s always something special about home,” she says. 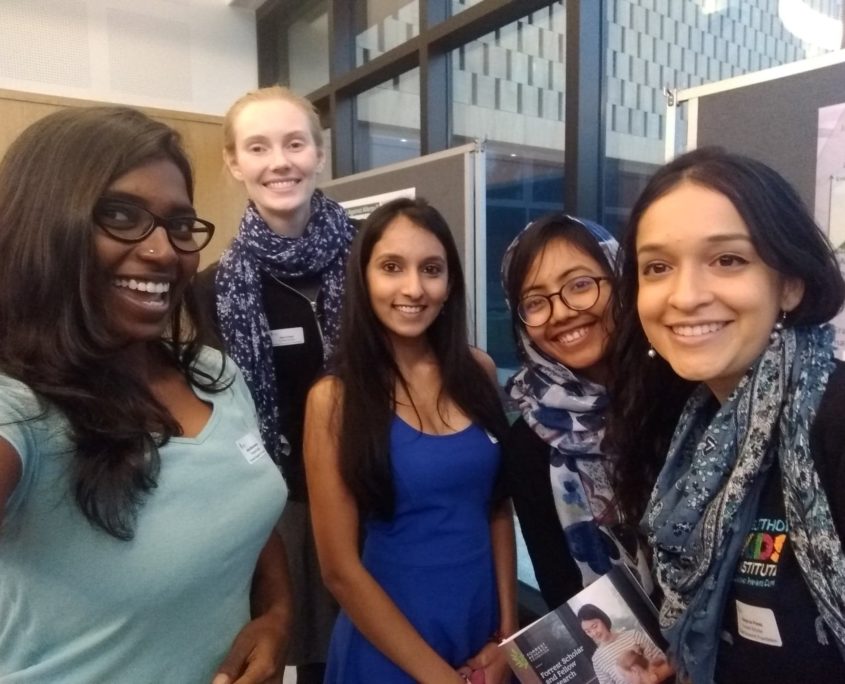 Future leaders – Bhedita and other Forrest Scholars at a research open day for UWA alumni and local residents at Forrest Hall in 2019.