Researchers at The University of Western Australia have developed a robotic fish that behaves like a bodyguard for native species and safeguards them against the aggressive attitudes of invasive pests.

Lead researcher Dr Giovanni Polverino, from UWA’s Centre for Evolutionary Biology, was awarded one of the inaugural Forrest Postdoctoral Research Fellowships in 2017.

Dr Polverino’s research is focused on evolutionary mechanisms behind the ecological success of invasive fish over native ones to predict different species’ response to human-induced changes in the environment.

His research team has developed a new generation of bio-inspired robots capable of combatting invasive and pest species in Australian fresh waterways while also protecting the local fauna.

“Originally introduced by humans in many environments to control mosquito larvae, mosquitofish are now one of the biggest threats in freshwater ecosystems worldwide, including Australia,” Dr Polverino said.

“Current solutions to stop, or at least slow down, the invasion of mosquitofish are largely failing and tadpoles of most frog species are paying the costs of this forced cohabitation. Is robotic fish the silver bullet against mosquitofish?

“We’ve studied the appearance and swimming patterns of native predators of the invasive mosquitofish from North America and integrated these features into a robotic predator fish that looks and moves like a real mosquitofish predator.

“We have developed a computer vision system to allow the robot to recognise in real time the invasive mosquitofish from the native tadpoles based on their movement, shape and behaviour so that robot could act differently towards the two species.

“It protects the native tadpoles as a robotic bodyguard by performing real time attacks towards the invasive mosquitofish when they threaten the tadpoles.

“We want to demonstrate that the most advanced technology using an engineered robotic fish can help protect Australia’s biodiversity and combat the spread of invasive species.”

“This study builds on a series of previous studies in which my collaborators and I have found that bio-inspired robotic fish can simultaneously repel the invasive mosquitofish and attract native species, with stressed mosquitofish that lose most of their energy reserves and likely compromise their survival and fertility in the long term.

“This study was performed at the Centre for Evolutionary Biology at UWA under my supervision and with the collaboration of researchers at UWA and a visiting engineering student from NYU supported by the National Science Foundation and the Forrest Research Foundation.” 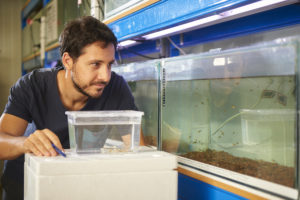